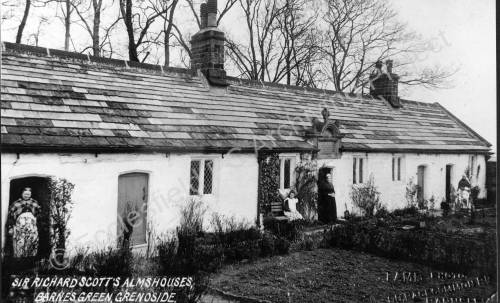 In his will of 1638 Sir Richard Scott of Barnes Hall directed that a hospital or almshouse was to be erected for six poor persons at Barnes Green. The almshouses were built in 1639 and stood alongside Elliott Lane. The scene shown here was photographed in the 1920s and shows Mrs Bibbs, a widow from Woodend in the central doorway with her grand-daughter, Mary Mellors, sitting on the garden seat. The houses were demolished about 1950.